LESSONS FROM THE DESERT

4 LEADERSHIP LESSONS FROM THE DESERT 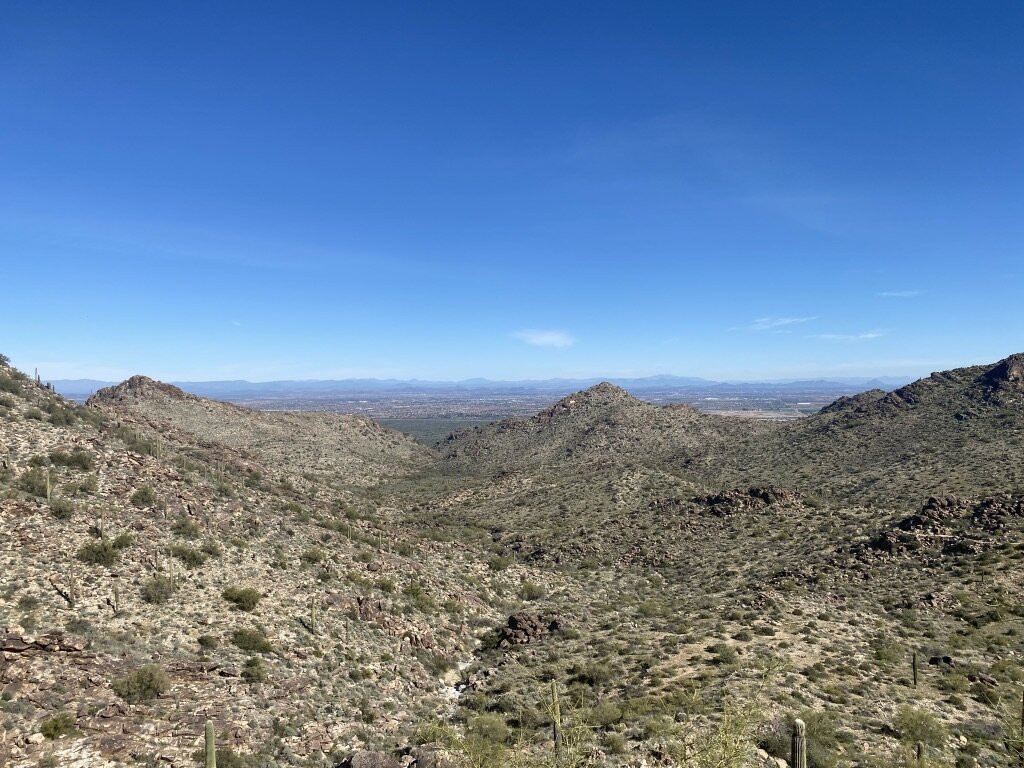 I spent 6 hours on a mountain in the desert with our elders a couple weeks ago, and I’ll never forget what we experienced—and what we learned. We were on retreat outside Phoenix, Arizona, led by Mark Moore. The hike was our main Saturday activity. It took us on a rocky path with crags and switchbacks and a 1,617-foot elevation gain. It wasn’t easy. But it was very good, not only because it built a bond among our leaders, but also because it showed us some valuable leadership lessons. I want to share four of them here. 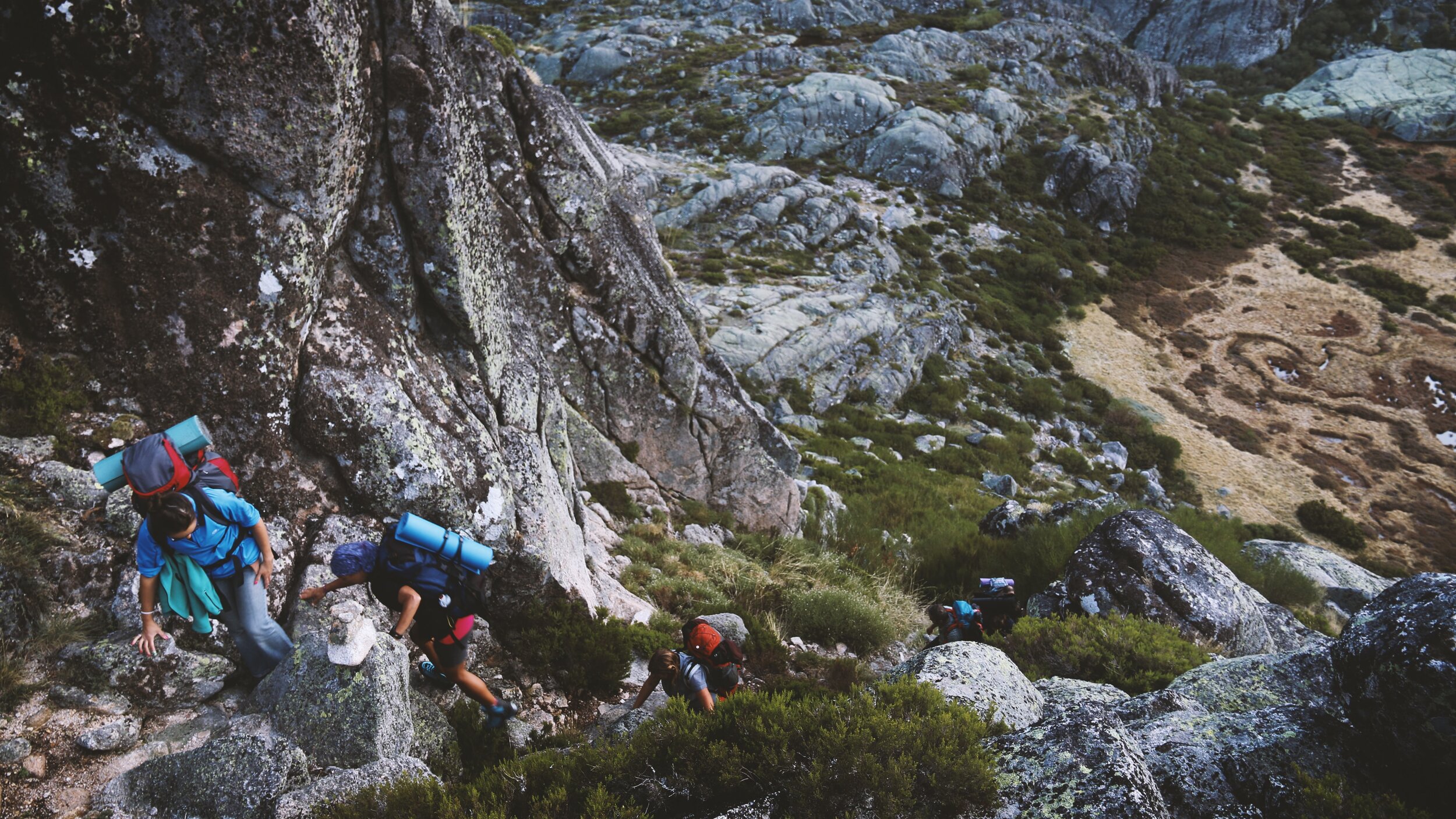 I might have been able to make the hike by myself, but it wouldn’t have been wise, for one reason if no other: snakes. I hate snakes, and although we didn’t see any, our guide warned us to watch for them. A rattlesnake bite is much harder to deal with if you’re alone. We didn’t see any mountain lions, either, even though they live where we were. They say mountain lions are less likely to attack a “herd” of hikers than one lone struggler on the path. We stayed together.

Everyone in our group was pretty fit, but one was just a few months out from foot surgery. He was in excruciating pain by the time we were done, but he finished because the group was with him. “You know we wouldn’t have left you on that mountain by yourself,” I reminded him later. We would have carried him down if he couldn’t have walked it. That’s how a group of brothers responds when one of their number is hurting.

But if I had tried this hike alone and had tripped and hurt myself, who would have rescued me? Leaders who try to go it alone are doomed to isolation. And in more ways than one we’ve seen again and again how isolation leads to desolation.

Even if I could have survived this hike by myself, it wouldn’t have been as memorable, and it would not have accomplished as much. “God did something here today,” Mark told us later as we reflected on the experience. We built trust, understanding, and a commitment to each other because we suffered together and looked out for each other up and down the mountain. 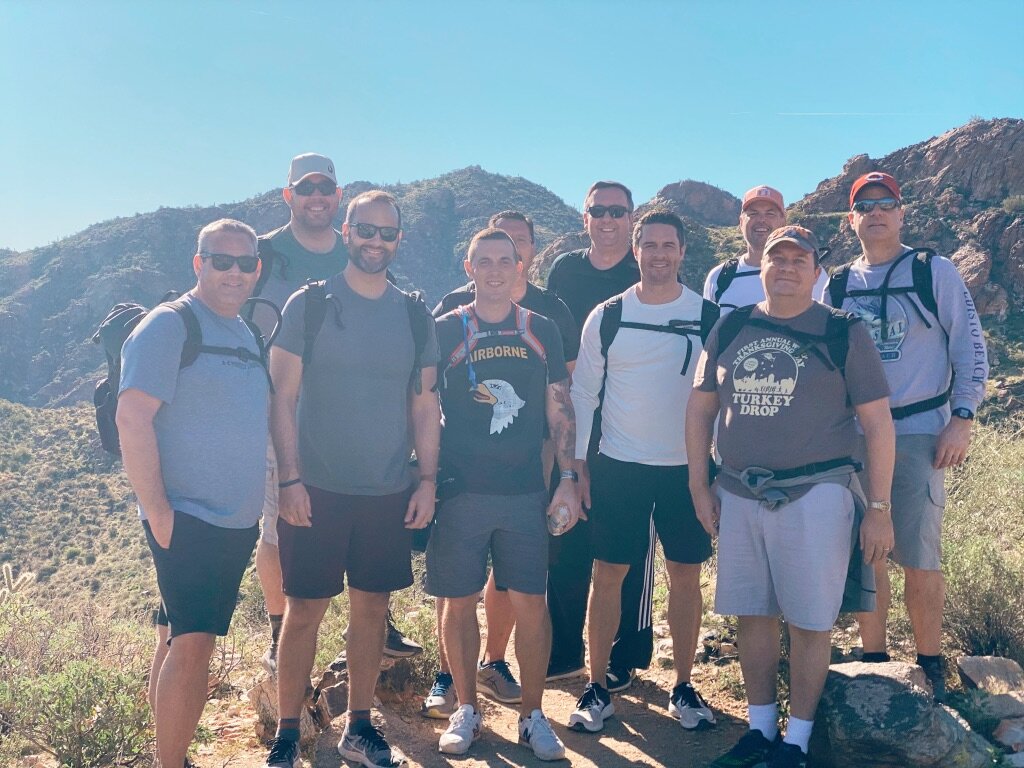 As the day progressed, we found ourselves in three groups. I was in front with a few who were pushing ahead. Several were in a middle group behind us, and behind them were the slower hikers, including our friend with the bad foot. I enjoyed being at the head, but I was careful not to leave the others. I tried to pace myself so I could always see everyone. And that’s the second lesson.

I remember countless leadership lecturers who advise, “Don’t get too far ahead of the group. They’re not following you if they can’t see you; they’re just searching for the path.” If a group member gets lost, the whole group must leave the trail to find him. This is exhausting and discouraging, and it delays the progress toward the goal.

Late in the afternoon, as we were climbing down the mountain, one of our group called out, “There’s the parking lot!” We could see it ahead of us—way ahead of us. We hiked at least two more miles before we got to the cars. I thought of the Israelites journeying toward the Promised Land. We weren’t expecting milk and honey, but we knew there was relief for our aching legs and a steak and potato dinner waiting for us at the bottom. 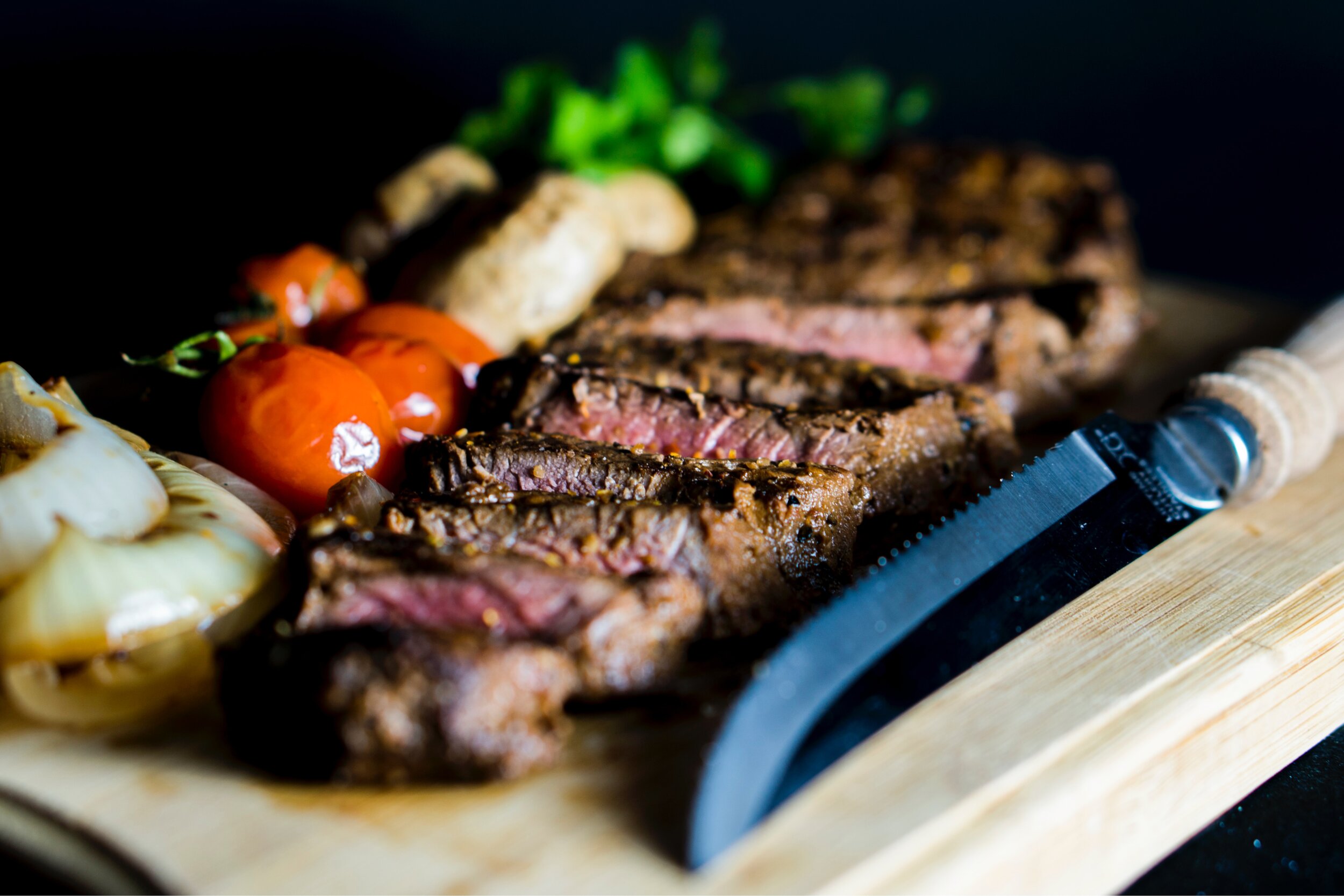 That would be the best meal of the day, but not the only one. We had been eating throughout the hike. Every mile we stopped to rest and munch high-protein snacks. We carried water and encouraged each other to stay hydrated. Two fellows from our host church hiked with us, carrying backpacks with a simple lunch we enjoyed midday.

Without that nourishment, we would have floundered. That’s so obvious, but some leaders fail to remember the spiritual parallel. Leaders must stay spiritually nourished. Sometimes the meal will be special—a steak-and-potatoes feast offered by a guest speaker, an excellent conference, or a book with rich insights. Other times the nourishment will come as simple Bible reading and prayer, a daily regimen that keeps you alive even when you don’t realize it. We could not have pushed through the pain of that hike sustained only by that morning’s breakfast or dinner the day before. Leaders cannot navigate today’s challenges guided by Bible principles they considered only years ago. 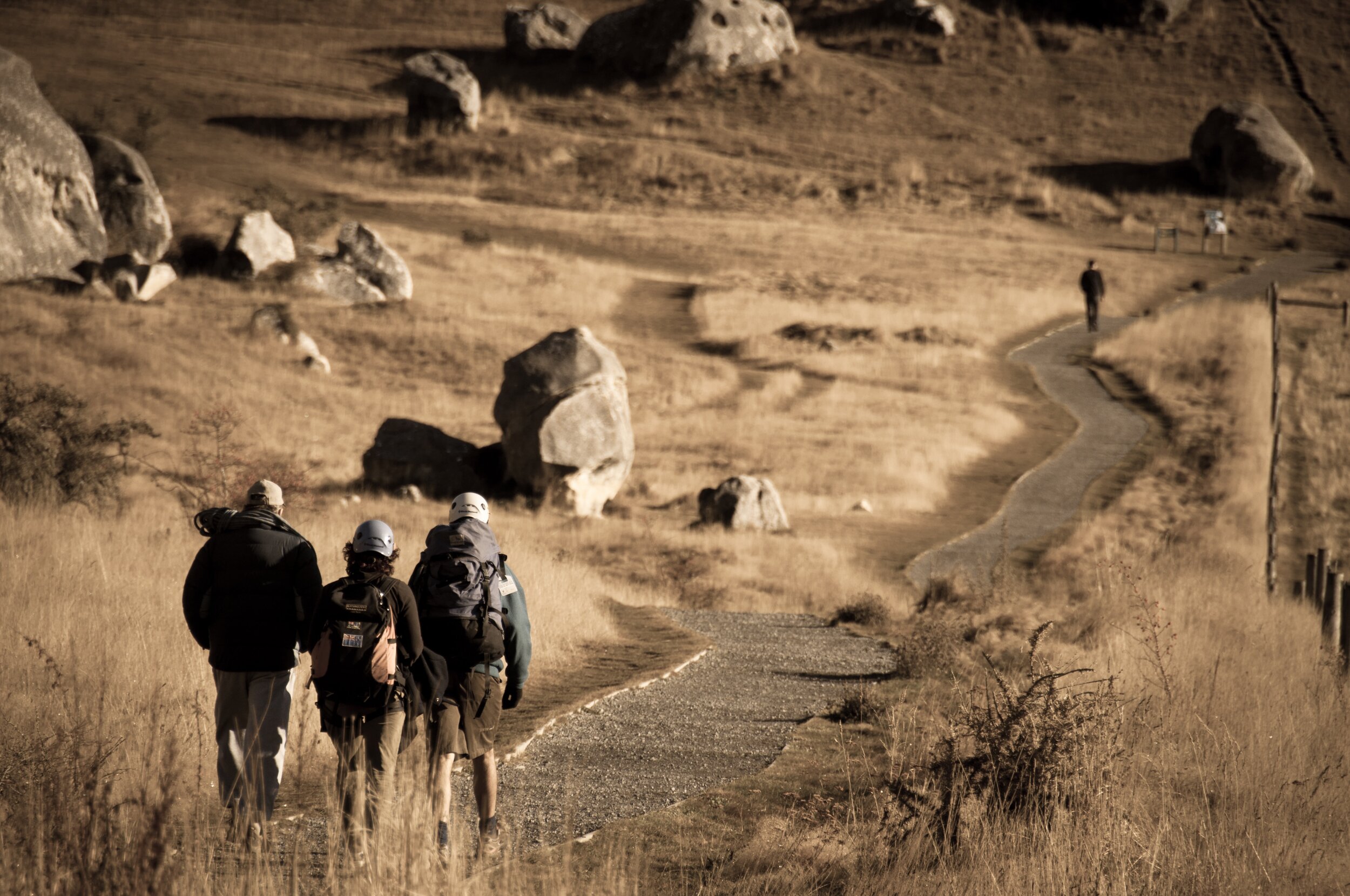 We kept our eyes on that parking lot for a long time. At one point toward the end of the hike, I was more than ready to be done. But I had no choice except to keep pushing forward. Turning back was not an option; behind us was a path of pain, not progress. As Winston Churchill famously said, “If you’re walking through hell, keep going.” The last mile of our hike was a lesson in persistence.

Sam Chand says most senior ministers quit just before the breakthrough they’ve been working toward. No one in our group was a quitter that Saturday. And as we moved that weekend from discussing the hike to dreaming together about our church’s future, I just kept feeling like we’re getting ready for some Promised Land moments of our own, here at our church in Ohio.